It seems we can’t get over our fascination with Mr. Rogers. What keeps drawing us back for another look at him? 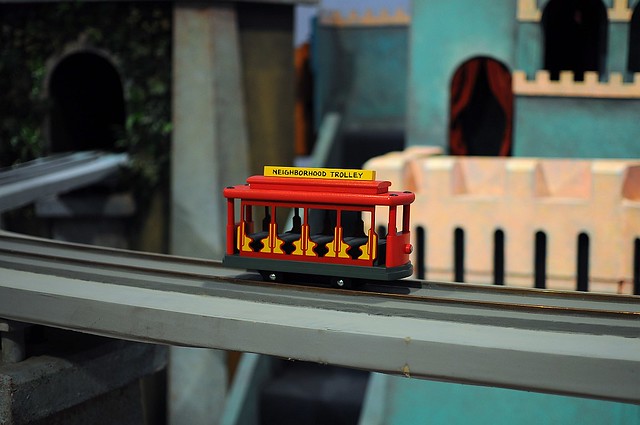 A Review of “A Beautiful Day in the Neighborhood”

Watching Tom Hanks play Mr. Rogers is a delight. He creates a version of a familiar figure that is convincing, without stooping to impersonation that is corny. As the film weaves together complex layers of a compelling story, we are taken back in time to the set of Mr. Rogers neighborhood with its familiar theme song and the distinctive trolley whistle. The film also lets us see Fred Rogers off-set in his home, with his wife, at the pool, and riding the subway in New York. Layered onto the story of Mr. Rogers, there is a new story of a friendship that gives us a different insight into the man Fred Rogers was.

Much credit for the success of this lovely film lies with the performances of a top-flight supporting cast. Matthew Rhys, in the role of Lloyd Vogel, has proven once again, as he did in ” The Americans,” that he can portray a dark and troubled character with relatable emotional depth. Susan Kelechi Watson plays alongside Rhys and sustains a tension that sets the character of Lloyd Vogel up for transformation over the course of the story. Chris Cooper plays an annoying alcoholic dad, who nonetheless loves his son, despite the fact that his son is stuck in anger about his father’s failures.

A fictional element in the film invites us to see Mr. Rogers through the eyes of Lloyd Vogel, a character based on Tom Junod, the journalist who wrote an article about Fred Rogers in Esquire in 1998. Although the role of Lloyd Vogel is largely invented for this film, an article written by Junod for the December, 2019 issue of Atlantic confirms that the portrayal of Mr. Rogers by Tom Hanks is true to character.

Fred Rogers has been dead for sixteen years, and “A Beautiful Day in the Neighborhood” is the second film about him in two years. The documentary “Won’t You Be My Neighbor,” was created in 2018 to celebrate Fred Rogers’ 90th birthday. It’s worth noting that it is not children who keep coming back to check out Mr. Rogers again. It’s adults who find these films interesting. It seems we can’t get over our fascination with Mr. Rogers. But why? What keeps pulling us back for another look at him?

This new film reveals what parents watching Mr. Rogers on TV over the shoulders of their preschoolers learned long ago. Mr. Rogers’ approach to children was not shallow: he dared to speak of death, divorce, bullying, war, violence, and much more. Because children worry about these things, Fred Rogers was convinced that it is better for a child to talk about them with a caring adult than to brood about them alone. Child-viewers were drawn to Mr. Rogers because he was interesting, but they stayed with him because he was comforting.

Even more interesting than watching Mr. Rogers interact with children is watching him interact with adults. There are some steps that seem to be repeated over and over again. The interaction begins with adults asking Fred Rogers about his work with children, and in many cases they thank him on behalf of their own children, who were his fans. They assume that is his legacy, but then the conversation moves on to what many adults think of as Mr. Rogers’ eccentricities: the cardigans hand-knit by his mother, the navy boat shoes he wore on set, and his puppet voices.

There is a pivotal moment when adults realize that Fred Rogers is as serious about adults as he is about children. In an interview with Joan Rivers on the Tonight Show in 1983 we see this happen. Most striking about the interview, though, is what happens when Mr. Rogers sings “I Like You” to Joan. It is a song heard many times on his show, but this time he is singing it to her, a lightening fast comedian who can turn anything into a joke in order to deflect feeling it too deeply. As Mr. Rogers sings her defenses melt, and she realizes that he sees past her clowning and humor. He likes her, she is caught off guard, and she doesn’t know what to do.

Adults are often touched when they see these scenes in which Mr. Rogers interacts with someone so carefully and respectfully, but also so intimately and authentically. In her “Mr. Rogers moment” Joan Rivers had to consider what so many others have observed about him. Maybe he isn’t just a performer. What if he’s real and means what he says. Are we ready to hear it?

The thought that Mr. Rogers is authentic is confusing. It’s a complicated time for heroes, and not just for the heroes, but also for those us of us who admire them. We’ve been disappointed so often by heroes we’ve come to expect it; to protect ourselves we stay ready for when they will let us down. We admired Bill Cosby and laughed along with Pee-wee Herman, until we discovered a sinister side behind their entertaining personas. The trust we had for them degraded into embarrassment and rage, on our part, for being taken in by them. Because it’s hard to forgive, it’s hard to trust, even in Mr. Rogers’ neighborhood.

That’s why it gets our attention when those who knew Fred Rogers best consistently reinforce our trust in him. Time and again they tell us that the man who played Mr. Rogers on the set is the same man who walked off the set and back into his personal life. It wasn’t an act. The crew that worked with him attests to this, and friends, like Tom Junod, give many examples of the remarkable compassion that was Fred Rogers’ way of life.

Mr. Rogers was extraordinary in part because he was so disarmingly ordinary. Few of Mr. Rogers admirers actually imitate the features that make him recognizable: a cardigan knit by his mother, the flamboyant toss of the shoe as he changes from street shoes to boat shoes, or his puppet voices. It’s hard to imagine singing his “I Like You” song to an adult without adding parody as insurance against being perceived as naive. If we are honest, and Fred Rogers would expect us to be, we have to admit that Mr. Rogers, though likeable, was a little eccentric.

Perhaps it is to balance our questions about Mr. Rogers’ eccentricities that we find his self-discipline so interesting. He lived a life that by many standards seems rigid: regular work hours, swimming daily for exercise, a restricted vegetarian diet, and the practice of praying each day for a long list of people by name. He played the piano, and was married only once and for over 50 years, both accomplishments that take a lot of patience and practice. Most remarkable are the notes and phone calls with which he reached out to stay in regular contact with people to whom he had made a commitment of caring. It all adds up to a great deal of structure. We can admire this about him too, but it is probably not this that draws us to him.

I wonder if our fascination with Fred Rogers is fascination with his commitment to radical kindness? Is that what seems too good to be true? We understand his commitment to the well being of children; caring about children is a popular cause these days. But what about a man who befriends those who laugh at him? Consider his ability to embrace Eddie Murphy with friendship after a SNL skit that merciless parodied Mr. Rogers and his neighborhood.

Can we understand a man who resolves to see the good in others no matter what? Mr. Rogers did not focus on flaws, and he did not have one category for friends and another for critics. Also he did not expect that good people would always be nice. Can we trust a man who does not fear speaking openly about difficult things, not because he is brazen, but because he is tender? Can we trust a man who loves his enemies?

As disarming as Mr. Rogers’ kindness seems to be, his example can make us uneasy. It took effort to become Fred Rogers/Mr. Rogers. To some his style seems foolish and odd. Is he too good to be true? In any case few of us have the grit and discipline to be as kind as he was. It’s easier to practice indifference than compassion. What will we be remembered for? What if we are remembered more for cruelty than kindness?

Perhaps that is why we keep going back to Mr. Rogers. We need another dose of encouragement. We want to check out once again if, with effort, it is possible to be a kind person. Is kindness real? Does its impact last? This is the feather of hope that Fred Rogers has given us.