There is a growing genre of comic fiction about old folks. In 2014 Catharina Ingelman-Sundberg wrote The Little Old Lady Who Broke All the Rules. It was originally released in Sweden, but was translated and distributed worldwide, eventually becoming a bestseller in Canada and selling over one million copies. She had followed in a trail blazed by Jonas Jonasson whose book The Hundred Year Old Man Who Climbed Out of the Window and Disappeared sold over eight million copies. Fredrik Backman gained attention when his novel, A Man Called Ove, was translated from Swedish to English and distributed worldwide in 2016. Most recently Dutch 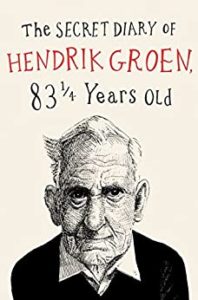 author Peter de Smet has captured a spot in the genre with The Secret Life of Hendrik Groen, 83 ¼ years old. After first holding a place for over thirty weeks on the bestseller list in the Netherlands, it has now been released in twenty-one other countries, along with its sequel On the Bright Side: The New Secret Diary of Hendrik Groen, 85 years old. Each of these authors has gotten rave reviews.

The authors are brilliant observers of ordinary people, but there is another key ingredient they all share. They make people laugh with impossible details and slapstick scenes about old people. What hundred year old man can climb out of a window? In a scene reminiscent of the sad clown in the circus taking a prat fall, Hendrik Groen tells of Mrs. Been, who fails to lock the wheels on her wheelchair, and when it tips over she falls onto a fully loaded tea cart. It may be funny when this happens in a circus, but it is a disaster in a nursing home. So hold the laughs. Backman recounts Ove punching out a clown in the waiting area of a hospital. The clown offers to entertain children by making a coin disappear, but uptight and stingy Ove, a man who has barely survived dire poverty, thinks the clown is trying to rob him.

These stories have a problem with cultural appropriation. When Oprah’s Book Club promoted Jeanine Cummins American Dirt, a story about migration, it caused a stir because Cummins was not part of the group whose story she was telling. It began a conversation about who gets to tell stories? What gives an author legitimacy? This is an important issue when victims of discrimination are portrayed in literature. It is also a fair questison when applied to portrayals of aging.

Stereotyping is a way of locking those from whom we want to be separate in the space of “the other.” Laughing at them might make the distance seem less brutal, but for the object of the put-down the shaming intensifies the insult. Portrayals of race, disability, gender, ethnicity, and alternate lifestyles have frequently been portrayed this way in stories. Values are changing. Blackface on stage isn’t funny. Lisping jokes about gay people aren’t either. And a president who mocks a man with a mobility impairment is totally out of line. Isn’t it time to add age to the list?

When Fredrik Backman wrote a story about Ove, the author himself was thirty-five years old. He created a troublesome old man, rigid in his ways, and full of self-pity about his losses. If Ove were your neighbor you wouldn’t be laughing, and if he were your grandfather, then shame on you for laughing. We laugh about our prejudices because we lack the intention to do anything about them. We might call this the “guffaw defense.” We use it to avoid having to look at tragedy squarely. What gives a young author legitimacy in writing about an older perseon if he crosses the line into stereotyping, disrespect, and bullying?

Peter de Smet was just over sixty when he wrote the story of Hendrik Groen, a character in his mid-eighties. What de Smet turns into humor is far from humorous for real older people. Hearing loss and visual decline are not comical, they are the stuff of daily humiliation for those who are isolated by these losses. Woven through his stories are comic images of older people using mobility devices ranging from canes to mini-cars. Getting around is a problem not a joke for many older people. The author stoops to calling aging men “old coots” and older women “biddies.” His name calling crosses the line into bullying.

One of the most painful scenes in Hendrik Groen’s story occurs at the bingo table when the number “44” is called. An elderly woman bursts out with the words “hunger winter.” In the winter of 1944 during the occupation of the Netherlands by Germany over four million citizens of large cities lived with drastic food shortages. Twenty-thousand died of starvation. Many ate cats, rats, and grass. Children went to bed night after night with the ache of hunger in their bellies. Is an older woman’s memory of this funny? Does she deserve to be reminded that younger people tire of hearing the same old stories? De Smet was born after the war. He did not live through “the hunger winter of 44.” Does he get to speak for those who did?

Humor directed toward those who are considered marginal carries with it an unspoken message of social expectations. When we laugh at older people for being old, we are also telling them that they should minimize their inconvenience to others, accept that their time of usefulness is past, remain silent about past events because we aren’t interested in hearing about them over and over and over again. In short, we are telling them to suck up their loss and step aside.

It is hard to talk with the young about aging, because they are trying to put off dealing with it as long as they can. Perhaps that is nature’s way. They have other important things to do at earlier stages of life. That which they hold at a distance will inevitably catch up with them, however, and sooner or later they too will die. If they are fortunate enough to put it off for a while they will get old along the way. The pain of that inevitable truth is what gets laughed away with “guffaw defenses.” Meanwhile through all the laughter we fail to ask what the value of growing old might be. Is it a wasted stage of life? To get a purchase on that we might have to stop laughing and ask someone seasoned with age.

In 2017 when Elizabeth Berg wrote The Story of Arthur Truluv, she herself was seventy years old. She understands the meaning of loss that comes with age. Her novel has depth that some of the others in the genre lack. She also understands that loss does not begin with age, and she creates a touching alliance between a colorful young woman and two older adults. Berg makes it clear that they need each other. Her writing mixes humor with compassion. It is not a mushy novel; it’s a respectful one. We might even call it “age appropriate.”