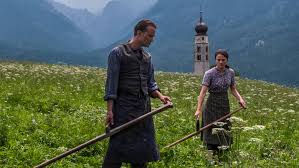 What’s the Value of an Oath?

Terence Malick’s new film, A Hidden Life, takes three hours to view and far longer to process. The first impression of the film is its aesthetic craft. The settings in South Tyrol are dreamlike: mountains, waterfalls, fields of waving grain, and rushing rivers. The camera angles and lighting bend the sense of scale so that the viewer feels enveloped in the scenes that spread across the screen. Tucked into this alpine terrain is a picturesque village marked by its tall church tower.

Close up scenes in A Hidden Life are as stunning as the landscape. Many occur in dark places where light enters as in a Caravaggio painting: in a low-roofed cattle shed, deep in a well that has gone dry, and in the corners of spare dwellings. Few words are spoken, and the actors’ gestures are slow, creating an impression that one is viewing portraits rather than actions. Some of the posed postures of the actors echo scenes of saints and martyrs, like those seen in stations of the cross or the wayside shrines that can be found along roads in the Tyrolean countryside.

Layered onto this beauty is the story of a soul-searing struggle. Franz Jägerstätter and his wife Franziska are farmers in the village of St. Radegund. They live the seasons, work the soil, share harvests with their neighbors, and raise their three daughters in a bucolic setting. They are farmers with weathered faces who carry earth under their fingernails.

War and the rise of the Third Reich change everything. The family suffers hardship when Franz is called away for military training, because his work still needs to be done, and in his absence the burden of it falls to his wife and her sister. When his training is complete Franz is allowed to return home to continue farming, but the prospect that he may be called back to duty is always looming. If the war continues and he is ordered to report, he will be required to swear an oath of loyalty to Adolph Hitler and the Third Reich, but his conscience does not allow it.

Franz gets little support for obeying his conscience. The Mayor pressures him not to make trouble, and neighbors ostracize him and his family for not going along with the new political order. The agony of his aging mother makes Franz’s resistance seem cruel. His parish priest reminds him repeatedly that his refusal to serve will bring suffering to his wife and children, and the bishop advises him against civil disobedience. Only his wife stands with him, encouraging him to do what he believes is right. Everyone knows that if Franz refuses to take the oath and serve the Reich, he will be arrested and executed.

On the surface the rationalizations for compromising his concience seem convincing. Franz can do non-combat duty as a conscientious objector; he can cross his fingers and speak an oath he doesn’t believe, and no one will hold that against him. Repeatedly Franz is reminded that swearing a false oath is a lesser evil than the suffering he will cause those whom he will abandon. Even the judge at his trial suggests to Franz that he is paying too great a price for his willfulness.

I was raised in a community in which memories of World War II and the occupation of the Netherlands were still vivid. As kids we sometimes debated whether there were circumstances in which lies were justified. If you were hiding resisters in the attic and German officers came to the door demanding to know who was present in the house, would you tell them? It was a good question for children who had been taught by parents and clergy that they should always tell the truth.

Our most common answer to the ethical dilemma of telling the truth in wartime pivoted around the excuse that bad guys are not entitled to the truth. The blame for necessary lies rested with the enemy. Some debaters with a more delicate conscience suggested that they would lie, but immediately after the soldiers left they would also confess the lie and ask to be forgiven. The most novel answer I ever heard was the girl who suggested she would offer the soldiers tea, thinking that kindness and a warm beverage would distract them from their mission. I can’t recall anyone ever suggesting they would tell the truth and let the person hiding in the attic die. Determining where to draw the line between crass deceit and necessary lies was intriguing, because we knew the line must be drawn somewhere.

Commitment to the virtue of truth-telling has softened considerably since I was a child. In many instances it has been replaced by a more flexible view that allows for saying whatever serves you best — the right of self-expression. If you’re okay with it personally, then you are free to say whatever you like. The heroism likely to be admired in our time is the bold assertion of autonomy rather than solid commitment to something outside ourselves. But when radical autonomy is the ultimate value, it is hard to imagine what it means to wrestle with ones conscience.

Some might argue that refusing to commit to abstract values does not preclude being loyal to others. Military combatants still die in the service of the nation. Even though none may be forced to, parents still claim they would die for their children. Men who tote guns gamble their lives to defend their honor or their turf, but they also hold on to the delusion that they will be clever enough to pull the trigger first. Even the promises we make to those we claim to love have gone through revision as we have become more convinced of our right to autonomy. I am reminded of a man who explained to me his decision never to marry his long-term girlfriend: “Promises should be aspirational not burdensome,” he said. “When they no longer work, it’s time to move on.”

It is bold of Terrence Malick to make a film that asks us if there is a loyalty so basic that nothing could persuade us to disown it. The brutal predicament of Franz Jägerstätter inevitably raises the issue of loyalties for which it is worth dying. That is, after all, the meaning of an oath. It is a pledge warranted by that which is more valuable to us than anything else. If it is your honor, then your honor is destroyed if you betray the oath. If it is your God, then your faith is shattered when your oath is false. In the case of Franz Jägerstätter, a devout Catholic, taking the oath would have required pledging a loyalty that would trump his devotion to God, and doing that with God as his witness.

That sort of religious devotion is hard to imagine in an era of elective spirituality. To die for the sake of conviction is a quandary that hardly fits into the modern imagination, but that is the tension in A Hidden Life. It first treats us to an aesthetic feast, and then sends us home with a challenged conscience. To what are we ultimately loyal, so loyal we would put our lives on the line for it?